Let's continue from where we left. During the last Notebook exercise, we created a couple of cost functions. This time, we will be writing an algorithm from scratch called gradient descent. If we want to find the global minimum (the value that will minimize the cost), our cost needs to be a convex function.

A strictly convex cost function will have a U-shape; the top part of this function is a convex set. If you choose two values and draw a line between those two points, the line will never leave the area. Read Wikipedia or a math book for more information. 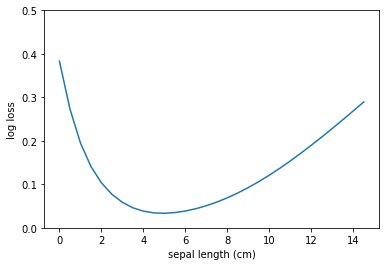 The intuition behind gradient descent is simple. Your machine learning model is a tiny bee that has just landed inside a bowl. The bee wants to find the bottom of the bowl. The bee has been told that there is cake. Unfortunately, the bee is blind, so it cannot see where the global minimum is, but she has a good sense of balance. The bee has also been told that the bowl is large: the diameter might be anywhere between 2 to 20 meters. Walking downhill until arriving to the destination would take too much time; the bee is a slow walker, but can fly be pretty fast. Thus, the bee decides to fly! But how far? The bee takes a rough guess: the global minimum might be 1 meter away from its current position. The bee flaps its wings, rises to a safe flying height (directly up), flies about 1 meter to the direction of the global minimum and lands (directly down). Based on where the bee landed, it can draw some conclusions:

By repeating the process above, the bee will eventually find the cake that is somewhere in the bottom of the bowl.

Remember that the selected cost function depends on whether you are building a regressor or a classifier. For regression problems, you will most likely be using some variation of squared loss such as Mean Squared Error. For classification problem, you will most likely use log loss (cross entropy) or hinge loss. The selected cost function needs to be suitable for the problem; if you cannot calculate the gradient, you cannot perform gradient descent. How you actually compute the gradient depends on your cost function.

Computing the Gradient of (halved) MSE

To compute the gradient numerically by iterating over the items in X and W, we need to compute the partial derivates for each weight individually. We could use pen and paper to formulate the derivation, but let's use the SymPy library, which is a module for performing symbolic mathematics in Python. Notice that the variables y, w0, w1... are never give any numerical values. Instead, they are symbols. The diff() function computes the derivate forms for our single-item cost function.

For the sample X[i], the W[0] (the intercept) and W[1] (the coefficient) would have their partial derivatives as:

You may have noticed that the single-sample cost has been modified; we are dividing it by 2 (=halving it). The reasoning is simple: to keep the formula to compute the partial derivatives shorter. Try running the code above with and without the / 2. You will notice that adding the extra divisor makes the derivate formula one variable shorter. Let's put these formulas into use in Python:

As you can see, we are simply iterating over elements in X. Each element in X is x = X[i]. (Notice the case-sensitivity! capital X is the whole dataset, lower-case x is a single row.) Thus, the ground-truth for any xinside the loop is the y[i]

Now, to get the full cost, we need to compute the mean of each weight. This will give us the gradient of the (Halved) Mean Squared Error.

In this bivariate case, the W would be of shape (2,1). Thus, also the gradient needs to be in the shape (2,1). The contents of this array could be, for example:

Currently, the code above is fixed for 2 features (incl. bias), having only 2 weights. How would you change it to fit n_features > 2? Feel free to try to implement this yourself.

In the example case above, the values of the weight matrix W were W[0] = 0.5 and W[1] = 0.5. The absolute values in the gradient vector are huge compared to our weight values (such as 126.6 versus 0.5). If we use these values as a step size, imagine what will happen. Our "machine learning bee" will fly past the base of the bowl and continue some extra (hundred) meters to the wrong direction. The poor bee would never find the cake. Thus, if we want to take a small step towards global minimum, we need to multiply it with some tiny value, which is usually known as an alpha or as a learning rate. The optimum or correct value is a hyperparameter you tune when improving your model. By convention, negative powers of ten are used as a starting point, such as 1e-3 = 0.001. This value needs to be tweaked if learning is too slow or doesn't happen at all.

Now, the step-sizes will be one thousandth of the original:

Since the W and shape arrays share the same dimensions, we can simply perform element-wise subtraction to update the weights:

This is also implemented in the Exercise Notebook in Python, so read through the Notebook with care.

Running a cell with %%timeit magic function displays the average runtime per cell over a few trials. Below, you can see the timings when run on a fairly powerful laptop computer:

As can be seen above, the vectorized form takes only a fraction of the time of the looped implementation. The winner is fairly obvious.

If we store the MSE after each training step (=epoch), we can plot how the cost changes over time. Notice that the step size will get smaller at each epoch, since the values in gradient are smaller. This will make the algorithm to ease-in towards the global minimum. 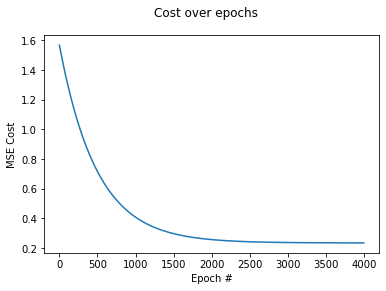 The data can also be plotted as a contour plot, where x and y axes represent the theta, which are the slope and the intercept when only one feature is present. 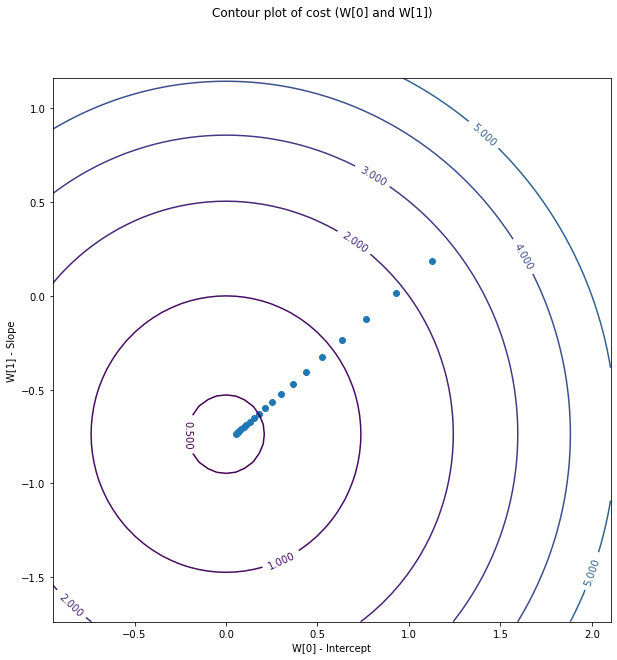 What we have just implemented is a (Vanilla) Gradient Descent that treats the whole dataset as a single batch. The weights are updated based on all samples in the datasets. When your dataset is massive, this is wasteful. There are multiple options to avoid this:

Currently, our code is trying its best to minimize the output of the cost function.

Regularization will slow these steps down in order to avoid problems of overfitting. We haven't discussed this topic yet, so do not worry if the word "overfitting" is new to you. For now, believe that adding some regularization, also known as penalty, can be useful in certain scenarios.

In scikit learn's SGDRegressor, the regularization is defined as: "The regularizer is a penalty added to the loss function that shrinks model parameters towards the zero vector using either the squared euclidean norm L2 or the absolute norm L1 or a combination of both (Elastic Net)".

Before adding the regularization, the cost function didn't have any access the to weights (W). Now it does. By applying regularization, we can add penalty based on how large the weights are.

NOTE! The W[0], the intercept, should not be regularized. We want to affect the slope; not the bias. Since we have included the bias into our X, we need to modify the code slightly.

As can be seen, the gradients have been shrunk towards 0 based on the how large the original W is. Remember that the step size will be computed using the learning rate.

This lesson might feel a bit overwhelming. Do not worry! This all will make sense when you learn how to plot learning curves and learn various useful concepts such as overfitting. What is important is to understand the intuition behind optimization and regularization.

Usually, you don't have to write the code for optimization and regularization yourself, assuming you are using libraries such as scikit learn or TensorFlow. Different regularization methods work in different cases. For example, L1 regularization will shrink the least useful coefficient to zero, essentially performing feature selection. This can be useful when you have thousands of features. L2 can be considered as the 'default' regularization you will be using in most cases.

At this point, it is also fair to point out that all problems are not convex. Some problems, such as many faced by deep learning algorithms, have a bumpy cost landscape. Thus, there are local minima, which may not be the deepest potholes in the graph, but do look like one if you are a bee inside of it. Nevertheless, SGD is being used in deep neural networks: it may not find the global optimum for all of the weights, but it is usually performing well enough.

Before you continue to next lessons, compare the scikit learn documentation about Lasso regressor, Ridge regressor and ElasticNet regressor.