Most common types of Machine Learning

Before continuing further, let's define to key terms which will be needed in this lesson and within the whole course: an algorithm and a model.

So when you face a problem that you want to solve using machine learning, you choose an algorithm. Then you train the model using data.

Three most common types of machine learning are:

The categories cover the most commonly used machine learning types, but it should not be seen as a definitive list. You may, for example, read about semi-supervised learning, which is a hybrid of supervised and unsupervised learning.

Recap: Machine learning is a study covering methods of making a computer learn. Instead of being explicitly programmed, the machine learning maximizes its performance progressively (based on experience, E).

Regression models are able to predict a continuous-value attributes. The output is often a float-point number such as 12.53255. The attribute which is being predicted could be, for example, life expectancy in years, housing price in thousands of dollars, annual profit of a company in dollars. 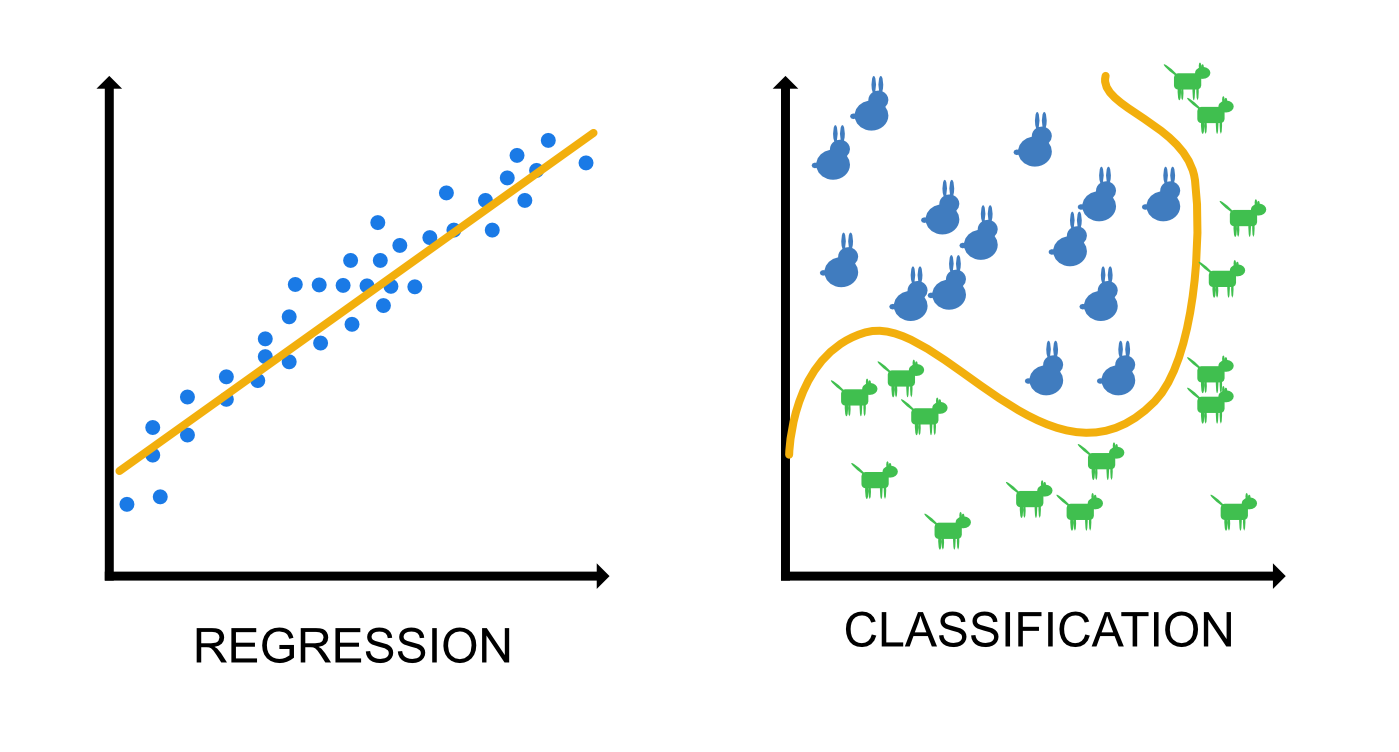 In the graph above, you can see simplified regression and classification examples. In the regression example (left), the predicted value is the house price in dollars. The x-axis would be some feature of the house, for example the area in square meters, and y-axis would be the price. In the classification example (right), we are classifying dogs and rabbits. Both the x and y axes would be features of the animals, say, the body weight (x) and the length of the ears (y).

The given examples are using just one or two variables. Don't let this fool you into thinking that supervised learning wouldn't be a powerful tool. By selecting multiple, meaningful features, a supervised learning model can outperform a human in prediction tasks, especially when using deep neural network models. Note also that a good algorithm isn't enough; you need a lot of meaningful data that has been labelled wit high precision. Labelling (often) involves human input and can be a time-consuming task.

Clustering data may be useful in many kind of applications, such as in market segmentation. Clustering can be used for finding segments of customers. These segments are groups individuals with similar characteristics or behavior. Various marketing strategies or approaches can be used for different kinds of groups.

Reinforcement learning systems learn by interacting with the environment. The action will change the current state of the environment and produce some reward. Learning happens as a "loop of trial and error". A number of iterations later, the system has learnt to maximize the long-term reward by taking actions based on the current state of its environment. Imagine an insect trying to find its way out of a maze, while being rewarded with honey when performing correct turns.

Reinforcement learning is useful in dynamic environments, such as in games and automated stock market trading. 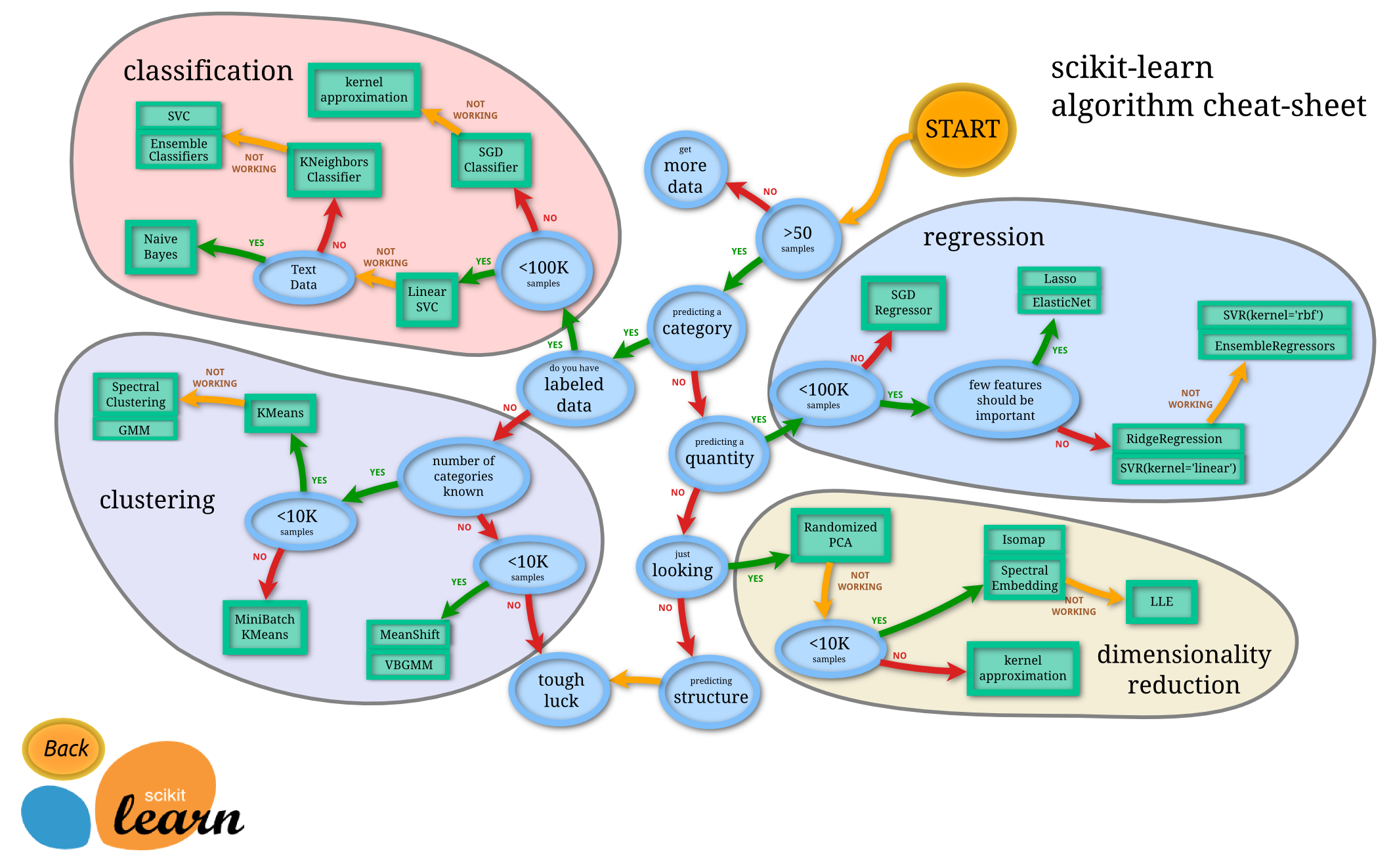 The map (or a decision tree) above is taken from scikit-learn's website. Examine the map closely. You do not need to recognize the names of the algorithms yet, but following the paths in the map should give you a rough understanding on how the problem and the data affect the algorithm selection.

Problem 1: A dataset consists of newsgroup posts and their labels. The labels are topics (such as sports, games, arts, …). You need to create an application that will predict the topic of a newsgroup post that does not yet have a topic (based on the body text).

Problem 2: A dataset consists of parameters of greenhouse data of roses [temperature, humidity, light intensity…. growth per day]. You need to create an application that will predict how much a given rose will grow per day.

Problem 3: A dataset consist of cat images. The images are 50x50 pixel RGB images with no other data. You need to create an application that will predict if the cat likes a certain brand of cat food.

Problem 4: A dataset consist of metrics of a server [CPU temperature, HDD temperature, HDD load, …]. You need to create an application that will warn if a server is behaving unusually. (Who knows, maybe these strangely acting servers are either under attack or about to malfunction!)

Problem 5: There is no dataset, but there is a virtual environment: Pac-Man game. You need to create an application that will learn to play the game.