Working with Sensors and Actuators

In this Section, we will take a look at how sensors and actuators are used in building IoT solutions. But, what are sensors? We make sense of the world around us through our sense organs.

Likewise, electrical and electronic circuits take physical inputs through sensors. The process of converting sensed energy into another form is called 'transduction', and the devices that do the transduction are called 'transducers'. Sensors are just one type of transducers. For example, a light sensor transduces luminosity into electrical resistance.

There are a wide variety of sensors available for the IoT enthusiasts. In this section, we will cover some of the most common sensors that are used in IoT solutions.

Photoresistor, also known as a light dependent resistor. Some kind of types of LDRs are in Picture 1. 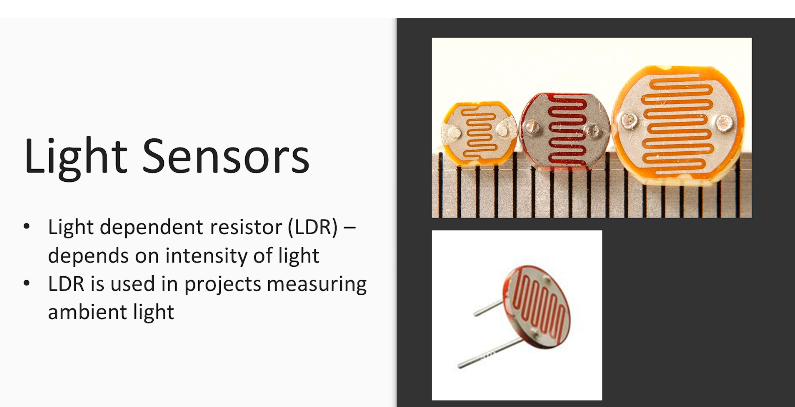 The LDR responds to visible light. A flame sensor, on the other hand, works by changing its resistance based on the level of a type of infrared light emitted by flames. In picture 2 there are two types of flame sensors. 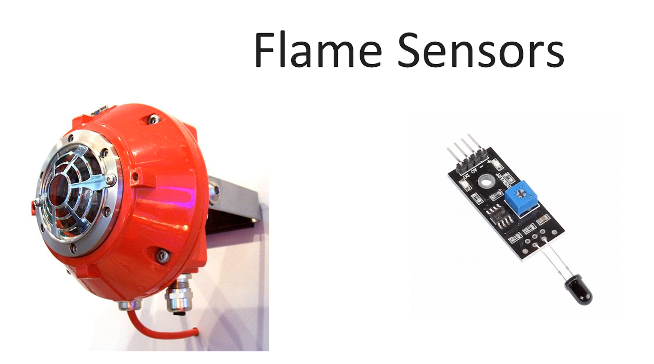 How Ultrasonic sensors work, here is link about that: https://www.maxbotix.com/articles/how-ultrasonic-sensors-work.htm 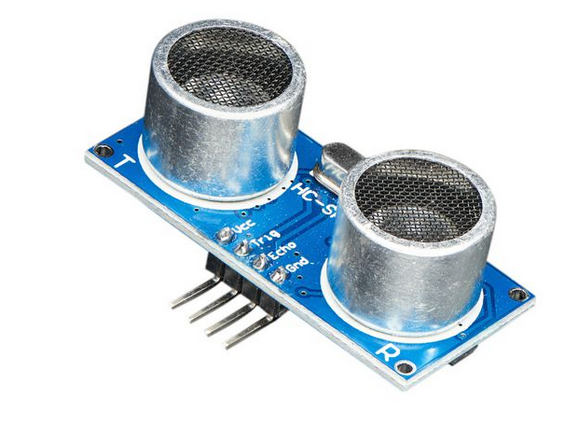 If you have to detect proximity of humans and other living things, you would want to use a passive infrared sensor, commonly known as PIR sensor. A PIR sensor, Picture 4, measures the radiated heat in the form of infrared light. An infrared light is light of such low frequency that humans can't see it. A PIR sensor, however, cannot give you the distance to the obstacle. There is also something called an active infrared distance sensor, which sends invisible light and tests whether it reflects back. This sensor can tell if something is closer than a given distance or that someone is walking in the hallway, opening a door, or moving in a room. 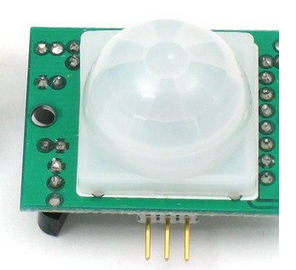 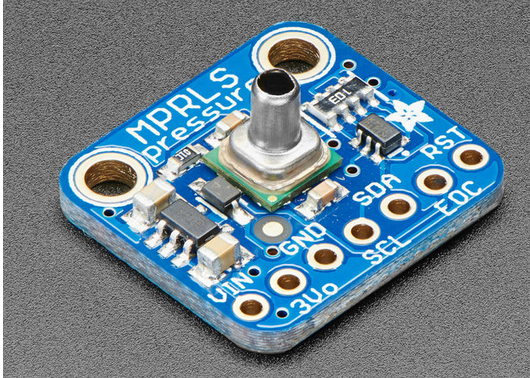 There are a number of inexpensive sensors to detect and measure any number of gases as we see in Picture 6 below. These sensors are used for detecting smoke, for detecting alcohol, methane, carbon monoxide, hydrogen, and even LPG. A typical human nose has 400 types of scent receptors enabling us to smell about 1 trillion different odours. But still many of us do not have the capacity to identify the type or concentration of gas present in our atmosphere. This is where Sensors come in, there are many types of sensors to measure different parameters and a Gas sensor is one which comes handy in applications where we have to detect the variation in the concentration of toxic gases in order to maintain the system safe and avoid/caution any unexpected threats. There are various gas sensors to detect gases like oxygen, Carbon Dioxide (CO2), Nitrogen, methane etc. They can also be commonly found in devices that are used to detect the leakage of the harmful gases, monitor the air quality in industries and offices etc. 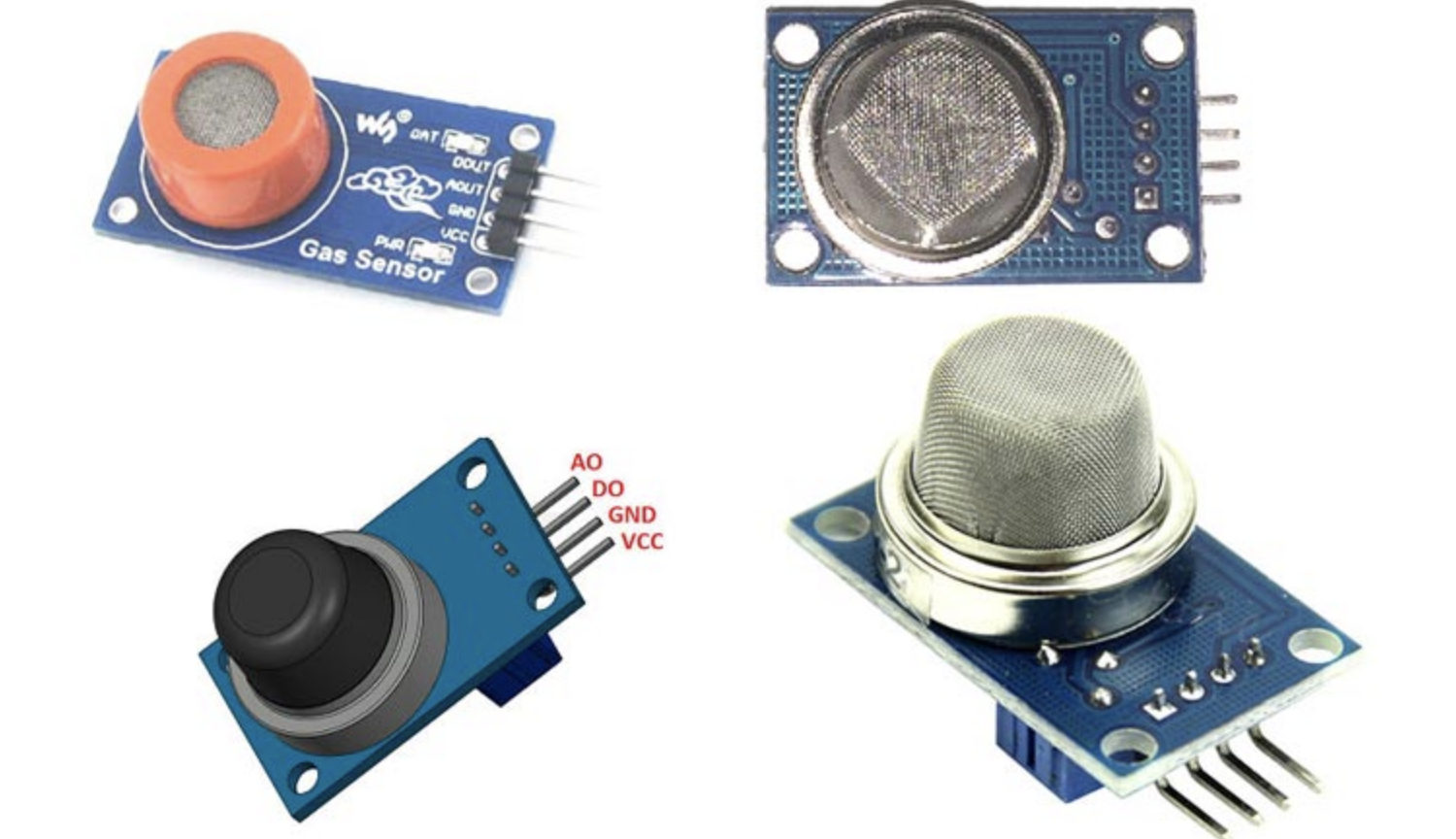 Suggested reading about one example: https://learn.adafruit.com/adafruit-mics5524-gas-sensor-breakout

Your phone screen goes from portrait to landscape mode when you tilt your phone. That is done by using accelerometer sensor. The phones have built-in accelerometers which are sensors that measure acceleration. There are also a type of sensors called gyroscopes, that are used to measure angular velocity. That is, how fast the sensor is rotating around an axis. Such sensors are used widely in self-balancing devices like two-legged robots and so on devices. One example about accelerometer sensor is in Picture 7. More information is here: https://learn.adafruit.com/adafruit-mma8451-accelerometer-breakout 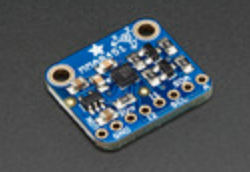 Here is a good and clear presentation of how actuators work: https://www.youtube.com/watch?v=VU2XCwXH-Bg&feature=youtu.be